on the trails at Alafia

Mimi, happy after she stayed on Magic Island!

Alafia State Park, next stop, and we were excited to get back into mountain bike mode. Alafia (pronounced ah-la-fee, as we learned from locals) has a system of epic trails so labeled by the International Mountain Bike Association (IMBA). We arrived and set up camp on the small 30-site campground. The park has electric and water, but the restroom/shower building is undergoing rebuilding. Portable shower and toilet stalls provided, but they are pretty smelly. Time to use our own toilet and learn how to dump the wastewater. We are still using the campground toilet for solid waste and showers, to get our camping money’s worth (!) and to save on space in our tank, eliminate having to dry out the shower curtain and basically make it easier on ourselves.

Bob on the trails 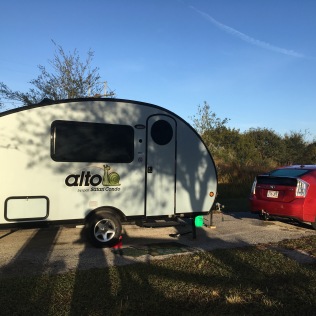 Little home away from home, at Alafia State Park

Sunset from our campsite, or Here come the mosquitos! 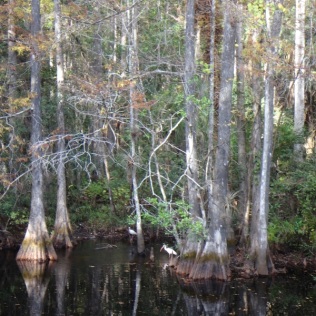 Some of the Alligator territory

Surprise attack of the mosquitos: First night here. Eating dinner outside at 5:45. Warm and pleasant. The sun just setting. Suddenly, we were swarmed with hundreds of mosquitos. As they descended, the outside of the trailer was literally furry with thousands of mosquitos – just like in a B-rated horror movie!! We wrapped up everything as quickly as we could, and got inside, where they had joined us, due to opening the door a few times, and trying to get the windows shut. We saw them getting in around the fan and squeeze through those little openings the screens have on the sides where they fold.  We battled them until the ranks had dwindled out enough to allow us to sleep, but had a problem allowing enough ventilation in the trailer to keep the airflow going with the fan. The next day, Bob taped around the fan and screened the little opening where the outside sprayer is, in order to leave that open for airflow. It proved not to be enough, so we fashioned soft foam blockers to fit in along the sides of the screens. That seems to have blocked the skeeters enough for us to leave a window open at night to work with the fan. (Note to the good dated 12/17/16 – this was the only place we have experienced a mosquito problem. We have hardly even seen one or two in most of the parks we have been in before and since. Good, right?)

The riding at Alafia is varied and you can get a good ride in right from the campground. River Run, easy, followed by Rock Garden, Is a great warm up.

One of the twisty log bridges on the trails

Most of the blue, intermediate, trails here would likely be rated advanced at other places. North Creek and Rollercoaster are the easier – flowy, drops that aren’t too drastic and ride-arounds for the really tough stuff. Twisted Sisters and Magic Island not so much – narrow, steep downs and ups, bridges and twists and turns with alligator swamp right over the edge. Here is where Mimi hugged a wall to save herself, and was darned glad it was there! The black diamond (difficult) are not for the faint of heart – Bob did a good job conquering many of them –  and we guess the double black (expert) are for the full-faced helmet daredevil crew.
About a ten-mile drive away, the Balm Boyette trails are worth a trip or two to ride. There is a two-mile double track in to reach the trails and we spent a good amount of time riding around trying to find trails, which can be a bit tiring. The trails are more moderate than at Alafia. Ridgeline is the signature black diamond, with many drops, steeps and turns. Mimi got through it (with a few walk ups and talk-throughs from Bob.)