assault of the loggers

Deciding  it was time to head north, we made a reservation to revisit Hamilton Branch State Park in South Carolina, nearest park to the FORKS Mountain bike trails, that we enjoyed in November. The lovely wooded park that we enjoyed just a few months ago has turned into an ugly logging area. The site we reserved was unavailable due to the mess. Many parts of the park were closed due to the heavy equipment and machinery. Not only was it atrocious to look at, it was loud!!

We scouted the park to find a new site that might be further from the hubbub and when we asked the ranger, we were told the loggers had just pulled out. We got the story from the Park Manager, who told us that the Army Core of Engineers, from whom the park leases the land, told them this winter about the logging, which is due to some dead trees being killed by the pine beetles. They decided to let a private logging company come in to harvest some timber, while also eliminating the dead trees. The manager told us the company had pulled out the day before – they decided the operation was no longer profitable to them. They took the trees they wanted, then left the park strewn with a mess, big mud pits off the sides of the park roads, and dozens of garishly marked trees with neon pink and orange paint that they never got to. There are also still many dead trees. So now the Park must deal with cleaning up the mess, and the dead trees that really do need to come down.

Visitors will also pay the price. If you have ever seen the site of a logging camp, you know that the scars remain for many, many years. You must now look past the raping of the land to see the beauty that still exists.

Nature will do her best to heal, and the landscape will provide in other ways, such as the beautiful sunsets over the big lake. We did enjoy our stay – taking off for biking, doing some fishing and paddle boarding and taking a couple of trips to Augusta. 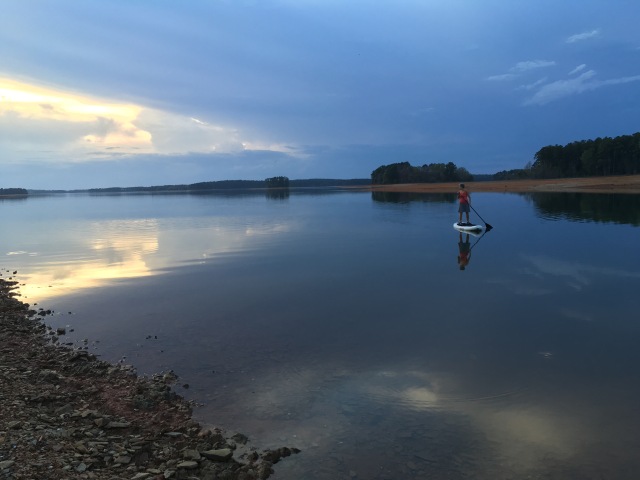